On Sunday, the Nassau-Suffolk Funeral Directors Association kicked off their first annual “Long Island Wine Country Tour”.  There was a total of 11 funeral directors, their family and friends.

We Visited Krupski’s Pumpkin Patch to pick some pumpkins and roll around in the hay.  Sip some hot cider and nibble on popcorn.

We then went off the Peconic Bay Winery for a reserve tasting of their wines.  The Highlight for me was their 2007 Riesling.

We then went off to Bedell Cellars to enjoy some cheese, crackers and fruit along with their very delicious Main Road Red.  My favorite of the tasting was their 2006 Musee.

Here is a report that will appear in the soon to be released NSFDA News Bearer.  It was penned by our Executive Director Jo Pettite, who invited us to her house on the water in Southold before we hit the wine trail.  The pictures are from her as well…enjoy!

The first NSFDA “Visit to LI Wine Country” took place on Sunday, October 25th. It was a sunny day and the autumn colors on the North Fork were spectacular— a perfect day for pumpkin picking and visiting the wineries. Shown above, front, Dorothy Pacimeo-Comodore, event chair and standing, l-r,Corinne(Dorothy’s daughter); Greg Comodore; Sally, Wes, Bev and Andy Powell; Melissa and Michael Gorton Jr and their friend Karen.
Michael Gorton is a funeral director (McManus-Lorey FH) who loves wine and frequently visits the wineries of the North Fork to taste the wines and learn about them. In November  he is scheduled to take part in wine-making with a renowned winemaker at a prestigious Winery and we’ ll have more about that in a future issue. But for  now, for an educated layman’ s opinions about LI wines, visit undertakingwine.com ***(I have changed the name of the winery to keep you, my readers in suspense) 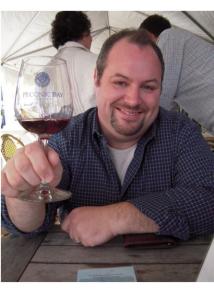 I am a Licensed Funeral Director who is having a love affair with Long Island Wine and the people that make Long Island wine so special. I am married to my wife Melissa and live in Rocky Point. Our first son Gabriel Noel was born on July 27, 2010. We have three cats and one dog.
View all posts by Michael Gorton, Jr. →
This entry was posted in Long Island, Winery Visit. Bookmark the permalink.