A visit to Pindar Vinyards Part 1

Not too long ago, I was invited to visit Pindar Vineyards and taste some wine with Les Howard, Pindar’s winemaker, and Pindar Dimanons, Pindar’s vineyard manager.  I was very excited about this visit, as I am for most visits, but this was going to be a little special for me.

Pindar Vineyards is the oldest family run vineyards on the North Fork.  They have vines that are 30 years old, some of the oldest on Long Island.  They also produce the most amount of wine on Long Island.  You can select from over 15 different types of wine.  Pindar was founded by Dr. Dan Diamonos, and he has created a wonderful wine family.  His son Pindar is the vineyard manager at Pindar.  His son Jason owns and operates Jason’s Vineyard and his other son, Alex operates Duck Walk Vineyards.

From Pindar Vineyards website, “At Pindar Vineyards, our award-winning wines are quite literally dreams come true.  It was the dream of our founder, Dr. Herodotus “Dan” Damianos, which helped create the winemaking industry on Long Island in the early 1980’s.  Moreover, that dream has, over nearly 30 years, turned Pindar Vineyards into Long Island’s best-known wine producer.  Today Pindar Vineyards encompasses more than 500 scenic acres.  We grow 17 varieties of grapes, creating them into some 23 varietals and proprietary blends.  We produce 70,000 cases of wine a year, making us the largest vineyard on Long Island.  But at heart we are still a family with a personal touch in every aspect of our business.”

Therefore, when I was going to visit Pindar Vineyards, I was going to be meeting the biggest producer of wine on Long Island.  This was a bit overwhelming for me a rookie blogger, but I felt that I had nothing to lose and everything to gain.

When I arrived, I was greeted by Les Howard, their winemaker and by Pindar Diminaos.  We met in the main entry way and they both welcomed me and gave my wife and I a tour of Pindar Vineyards.  The brought us into the tasting room which is huge, they are capable of serving 50+ people at their tasting bar.  We then went it Les’s lab where he was working on some blends.  He showed me his tasting notes and blends that he was working on.  He explained a chart that shows the tanks and barrels that hold and ferment Pindar’s wine.  Pindar showed me the layout of their vineyard and where things were planted.   It was quiet amazing to see the large amount of land that thier fruit was planted on, and how they were able to keep track and tabs on it all.

Les and Pindar explained how Duckwalk and Pindar trade off on fruit.  They went into a discussion on the difference of how the North Fork grows as opposed to the South Fork.  For example, Pinot Grigio grows so much better on the South Fork than it does on the North Fork.  So, Duckwalk will trade their Pinot Grigio for something from Pindar Vineyards.

We then walked around the bottling area and the storage area.  This brought back memories, Melissa and I went to Pindar on one of our first dates, Dr. Dan gave us a tour, and tasting of Champagne and Caviar…I honestly forgot about that.

Pindar and Les then brought us out to the vineyard.  It was a beautiful day and the sun was so bright and warm.  We walked around the Chardonnay vines that were some of the oldest on Long Island.  They were showing some sweet flavors and it was still a few weeks away from harvest.

We then tasted some Gewertzminer.  My wife and I love this varietal wine, it may be our favorite.  This was the first time we ever tasted this berry.  It was flavorful and sweet, it was interesting to chew on the skin.  That is where you started to pick up some of the spicy notes you find in Gewürztraminer.  I could almost taste this as if it were poured directly from a just opened bottle.  Surprising enough, it was still a week or two away from harvest.

It was very interesting to watch Pindar and Les discuss the berries and their thoughts.  You could see the excitement in their eyes and voice.  They were both on the same page when it came to the vineyard and how the wine should be made.  It truly was like watching two kids at Christmas when they opened gift upon gift.  And the gifts were just what the wanted.

A little history about Pindar and Les: Pindar grew up on the vineyard and used to help make the wine as a kid.  He also used to sell fruits and vegetables from a little stand in front of the winery.  Les is from New Suffolk and worked and just about lived on Pindar’s vineyard from a very young age.  Les learned the workings of being a wine maker and knew that’s what he wanted to do.  He  left Pindar and worked at various Long Island wineries, but last year, he returned home and you could see how happy he is to be home and how happy Pindar is to have him back on the vineyard.

We then walked over the Pindar’s barrel cellar, tank-housing area and their bottle storage location.  This building is not open the public and it is a new building.

We first saw the massive area that houses the boxed cases of wine.  It was amazing to the row upon row of wine.  I know that Pindar Vineyards produces alot of wine, but this was alot of wine!

Pindar and Les then showed Melissa and I an old remuage, where bottles of champagne are rested on and the lees are allowed to enter into the neck of the bottle.  They are turned a fraction every day.  Les wanted to show us the lees in the bottle.  He asked Pindar to bring over a bottle, you could see the hesitation in Pindar’s face and and hear it in his voice.  Les insisted and Pindar brought the bottle over.  Les began to turn the bottle to show us the lees.  You could see the horror on Pindar’s face.  We all got a chuckle out of it when Les said he would now have to turn that for another 15 years.  You see, all champagne needs to be turned 1/8 of a turn every day…so now they have to start all over with this bottle.

Vineyards add sulfites to wine (to help it age.  As a wine ages, it develops) complexity and brings out some of the wonderful flavors that make a great wine.  There are sulfites naturally occurring on the grapes as they hang in the vineyard.  There are some vineyards that do not add sulfites, they usually are biodynamic.  However, they run a risk by not adding sulfites, they run a risk is that their wine could turn into vinegar.  A little bit of sulfites can go a long way, it takes a good winemaker to know when enough is enough. (Omitted from origional post)

Topping up is a process where wine is added to a barrel where some is lost.  This loss is called Ullage.  What is lost is mostly alcohol and water vapors that are lost due to fermentation.  Because of this, oxygen can seep into the barrel if there is too much headspace.  Oxidation in wine is not good because flavors are lost.  Therefore, the barrel is topped off to avoid any oxidation.

We tasted though a series of wines from the 2008 season.  These wines will sit in the barrels for quite some time, as they needed more time to age.  We first tasted through a few barrels starting with Cabernet Franc then a Merlot, and a Malbec.  Some of my favorite wines.  The highlight was the Merlot.  It was very fruit forward and had a nice balance of acidity and tannins.  You could see the potential of this Merlot.  I also really liked the Malbec that we had.  The color was incredible and the bouquet was just what a malbec should be.  The berry, earthy and floral elements were very appealing.  The Cabernet Franc was also very nice and delicious wines, but that Merlot and Malbec were memorable.  When the 2008 Merlot is released, I will be first in line to pick it up.

Pindar and Les then gave us a tour of the very large stainless steel barrel room.  There are some of the largest on Long Island and probably on the east coast.  You have to remember that Pindar produces about 70,000 cases of wine annually.  Some vineyards only produce about 7,000 cases.  There is a huge difference.  Most of this will hold their rose wines and their white wines.  There number one selling wine, Winter White is stored in a huge stainless steel tank until the quality is just right and then they bottle it.

Les and Pindar showed me the various machines that they have and use to perfect and fine their wines.  I have never seen nor heard of these machines, and Les and Pindar did a great job of explaining them to me.  They have alot of interesting and cool machines at Pindar Vineyards.

We then walked out to the crush pad.  Les and Pindar went into the explanation of how they harvest grapes with machines that gently shake the ripe fruit from the vine.  They then showed me how they press the wine from harvest and the process of getting it into the tanks or barrels for fermentation.

We then went back to the tasting room to get into some of the good stuff that is made from some of the oldest vines on Long Island. 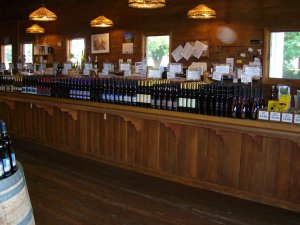 I am a Licensed Funeral Director who is having a love affair with Long Island Wine and the people that make Long Island wine so special. I am married to my wife Melissa and live in Rocky Point. Our first son Gabriel Noel was born on July 27, 2010. We have three cats and one dog.
View all posts by Michael Gorton, Jr. →
This entry was posted in Uncategorized. Bookmark the permalink.

3 Responses to A visit to Pindar Vinyards Part 1