Recently, Virginia wine bloggers John Witherspoon of anythingwine.com and his wife, Megan of  Wineconcience.com paid a visit to the North Fork of Long Island.  They were spending a few nights at Shinn Estate Vineyards while visiting some of the wonderful vineyards on Long Island. 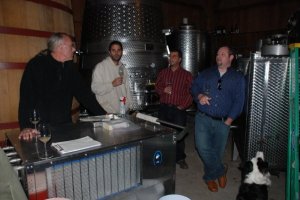 The Witherspoon were arriving on Sunday and Melissa and I were going to be out touring some vineyards with funeral directors from the Nassau-Suffolk Funeral Directors Association.  Fellow Long Islander and NYS wine blogger; Lenn Thompson was also planning on meeting up with the Witherspoons that day.  And Frank Scarola from Scarola Vineyards was also there for a while.

It was talked about possibly meeting up with everyone at a vineyard to hang out, meet each other and drink and talk about the best stuff on long island.  Lenn put it all together, and we met at Shinn Estate Vineyards along with Anthony Napa, Shinn’s winemaker, Barbara Shinn, David Paige, co owners and husband and wife of Shinn Estate Vineyards, Lenn Thompson of The New York Cork Report the Witherspoons and my wife, my wife’s friend Karen and me.

We met up around 5pm and for me, it was very exciting, because, I was meeting my first wine blog idol, Lenn and then John, who I have read for a while and really love his writing and reviews.

We first were offered to taste some of the pre fermentation juice in stainless steel tanks.  We tasted some lovely juice, one from Shinn the other from another vineyard.  Both had lots of flavor and potential.  Too soon to see where these were going, but they had all the potential.

We then went into the barrel room to taste some fermenting whites.  We were able to sample a skin contact white wine.  It was a little chewy and tough to get down, but I am very interested when it comes out.

A highlight was the barrel fermented Pinot Blanc.  This has a world of potential.  We probably won’t see this for a while, but you could see the possibilities of this wine.  This will be the first Pinot Blanc release from Shinn.

Then we were able to sample the wine I had my hand in.  This will be the second vintage of Shinn Estate Vineyards barrel fermented Haven.  It is a blend of Sauvignon Blanc and Semillon.  There was alot of wonderful flavors happening.  If you have not tried the current release of Haven, please go and try it.  It is wonderful.  It totally changed you mind in regards to barrel fermented white wine.  When done correctly, like at Shinn, the fruit shines through.

Some interesting happenings at Shinn that we tasted were Anthony’s attempt at a sparkling cider…maybe a hard cider.  This was wonderful and really enjoyable.  My wife loves hard cider and was very excited about this.

We also got a sample of Shinn’s pear wine.  It is in the very early stages, but something to look forward to.  The flavors were there, but it needed to be finished.  Too soon to tell, but keep an eye out for it.

Anthony then brought us over to taste his second release of Anomaly.  A white pinot noir, which was a huge success.  There were wonderful strawberries in there.  This should be another hit for Anthony.

We then went into the library to do some wine tastings of some past releases and future releases.  David first opened up a bottle of Shinn Estate’s 2004 Cabernet Franc.  This was their first release.  There were some wonderful, raspberry and early elements.  It was very soft and supple wine.  My favorite was the finish, which was long, but I was picking up just the slightest bit of fresh basil.  It was well balanced with plenty of fruit and the right amount of acidity and tannins.  It was showing nicely and it best yet….it still had legs.

The 2006 Cabernet Sauvignon was even better…despite the tough year Long Island had.  It was very different from the 2004.  This is something that you see in cool climate regions.  This in my opinion is what makes wine fun.

David then opened the un released 2007 Cabernet Sauvignon.  I got a little emotional when this was in my glass.  It really blew me away.  You can read my review later about this wine.  I was lucky enough to take this home to get a better feel for it.

Next on the list was another treat and one that is not released, Shinn Estate Vineyards 2007 Malbec.  This is Shinn Estate’s first Malbec, and a great Malbec in that.  I do not want to go into the Malbec here, but check back soon for a review.

David then dipped into his and Barbara’s private cellar and pulled out a 1995 Bedell Vineyards Cabernet Sauvignon.  This was very, very good and you can read a review of this wine and Lenn Thompson’s thoughts on the tweet up at his blog, New York Cork Report.

This was a wonderful opportunity for us wine enthusiast to meet for the first time and enjoy some of the best that Long Island has to offer.  It would be nice to do this more often at different vineyards…we just need more Tweeters here on Long Island!

I am a Licensed Funeral Director who is having a love affair with Long Island Wine and the people that make Long Island wine so special. I am married to my wife Melissa and live in Rocky Point. Our first son Gabriel Noel was born on July 27, 2010. We have three cats and one dog.
View all posts by Michael Gorton, Jr. →
This entry was posted in Shinn Estate Vieyard, Winery Visit. Bookmark the permalink.