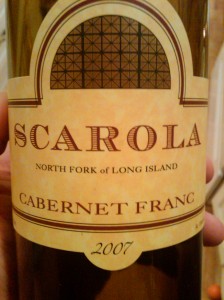 This is not my first post about Scarola Vineyards, I visited Frank Scarola a while back and I bought a case from him.  It was a mixed case, of some of his best stuff.  This was one of them that he included.

This is also not my first post on the 2007 vintage on Long Island, and it won’t be the last.  A bunch of the 2007’s have been released and there are still alot more to come.  This is, in my book, one of the better Cabernet Franc’s from that banner year of 2007.

On the nose I was picking up some cherry, raspberry, green herbs, toasty cedar and some fresh turned earth.  There was also a subtle aroma of fresh tomato leaf, something I love in a Cabernet Franc, and at this time of the year, it reminds me of summer.

The taste was even better; blackberry, raspberry, currant and cherry were the fruit up front.  There was also some rosemary and fresh green herbal notes.  I was also picking up some bell pepper, another element of Cabernet Franc that I find enjoyable.  There was some spice and subtle vanilla notes at the end.

The finfish was long and enjoyable.

This Cabernet Franc is true to the varietal.  It has the perfect balance of tannins acidity and fruit to make this a wine that will last for a while in your cellar.  There is just the subtle notes of vegetal that make me happy and make me consider this a true Long Island Cabernet Franc.

Frank does not have a tasting room…yet.  But you can pickup his wine via Scarola Vineyards web page.  I am not sure of the retail of this wine, I don’t remember because I bought this over the summer.  It has not been released yet and I don’t know when it will.  But when it does, it will not be around for long.

I highly recommend you pick up this Cabernet Franc from Scarola Vineyards.

I am a Licensed Funeral Director who is having a love affair with Long Island Wine and the people that make Long Island wine so special. I am married to my wife Melissa and live in Rocky Point. Our first son Gabriel Noel was born on July 27, 2010. We have three cats and one dog.
View all posts by Michael Gorton, Jr. →
This entry was posted in 2007, Cabernet Franc, Long Island, Scarola Vineyards. Bookmark the permalink.