“Come quickly, I am tasting the stars!” ~ Dom Perignon, at the moment he discovered champagne

The other night, at Roanoke Vineyards, the Wine Adventurers or the Pour Boys or the Four Poursemen,  we are not sure what we  calling ourselves, yet, Lenn Thomson, from the New York Cork Report, Henry Powderly, II, From Work in Progress(who also took the pictures), Adam Ehmer from Roanoke Vineyards, and yours truly got in on some Finger Lake Wine, with Twitter Taste Live.  This month our tasting was Sparkling Wine. Last month we were soaking up some Cabernet Franc’s from the Finger Lakes.

The first one up this night was  Chateau Frank Blanc de Blancs 2002 $30.00.  This is made from 90% Chardonnay and 10% Pinot Blanc, and made int the Methode Champenoise tradition.  On the nose, I was picking up some yummy yeast and doughy bread.  Something that I love in sparkling wine.  There was some citrus notes as well. 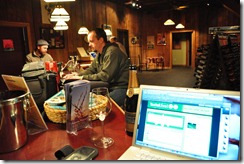 On the palate, I was picking some lemony citrus and a hint of wet stone minerality.  Very nice acidity and a long finish to go along with it.  At the end of the finish I was picking up some nutty creaminess too, which is another favorite of mine.

We then went on to Goose Watch Pinot Noir Brut Rose ($18.00)  This sparkler was made with 79% Pinot Noir grapes and 21% Chardonnay.  It was bottled in the Charmat process where it undergoes a second fermentation in steel tanks.  It is then bottled under pressure.  It had a color that was reminiscent of salmon.

On the nose, I was picking up this scent of watermelon Jolly Rancher, which I was nice, but not a fan of candy coated wine.  This then led to some strawberry and cherry aroma.  I was also getting a scent of banana, along with others who were on suing the tagline #flxwine.

On the palate, the flavors of all the fruit were present along with this crisp acidity that was palate cleansing.  There was also a hint of minerality there at the finish, but the fruit dominated this sparkling wine.  The candy notes of the wine were not as prevalent as they were on the nose, but they were there in the background.  For those of you who enjoy mousse like quality in a sparkler, then you would really enjoy this one.

It was a fun wine, it was great for entertaining.  I could see this being popular with the women.  The nose was the best for me, but the palate was a bit too much.  I was really trying to figure out what to pair with this sparkling wine.

On the nose, I was picking up something that I could not describe.  It was very intriguing and familiar.  Henry stated it was smoky on the nose, but not wood smoke.  I came to the conclusion that it was sun-baked rubber.

On the palate, it was a bit rough.  There was a citrus note that led to a tinny medicinal note.  I was also getting a sharp stinging sensation on the center of the tongue.  It tasted like something was missing.  Though, Evan Dawson, Finger Lakes correspondent at the New York Cork Report nailed it on Twitter with this delivery, “A bit tired, like a tired runner. Ran a rood race, but a bit done.”

The next bubbly of the night would happen to be the last.  And in a way it was a nice way of ending the night.  Lucas Vineyards NV Extra Dry ($19).  This, I believe was my very first Hybrid Grape, made of 100% Cayuga White grapes in the Méthode Champenoise way.

In my opinion, this sparkling wine had the best beads of the night, though thy may not have been the smallest, I will give that to Chateau Frank, they, the beads were really dancing.  Granted we also did not taste in Champagne flutes, because you just cannot get your nose into the glass to get a good whiff.

First up, on the nose, I was loving the yeasty bread note.  Just behind it was the aroma of lemon and citrus along with a mineral quality to it.  I was also picking up a subtle aroma of fermenting grapes, in a good way.  It is an aroma any wine lover loves.

On the palate, it was clean, crisp and refreshing.  The citrus was out in front ad behind it was a little apple too.  It was dry and had a pleaant finish, just maybe a bit short.

In conclusion,I would rank my bubbly this night as the following:

The surprise had to be Lucas VIneyards, and they were a very close second.  everyone was pleasantly surprised by the Cayuga grapes used and that a sparkling wine could be this good made with them, in the traditional method no less.

I am no expert here, and I have only tried a few sparkling wines on Long Island, but I would stick to my Long Island Sparklers.  The Finger Lakes were nice, I just like tasting the stars of Long Island.

I am a Licensed Funeral Director who is having a love affair with Long Island Wine and the people that make Long Island wine so special. I am married to my wife Melissa and live in Rocky Point. Our first son Gabriel Noel was born on July 27, 2010. We have three cats and one dog.
View all posts by Michael Gorton, Jr. →
This entry was posted in Finger Lake Region, Sparkling Wine, Twitter Taste Live. Bookmark the permalink.