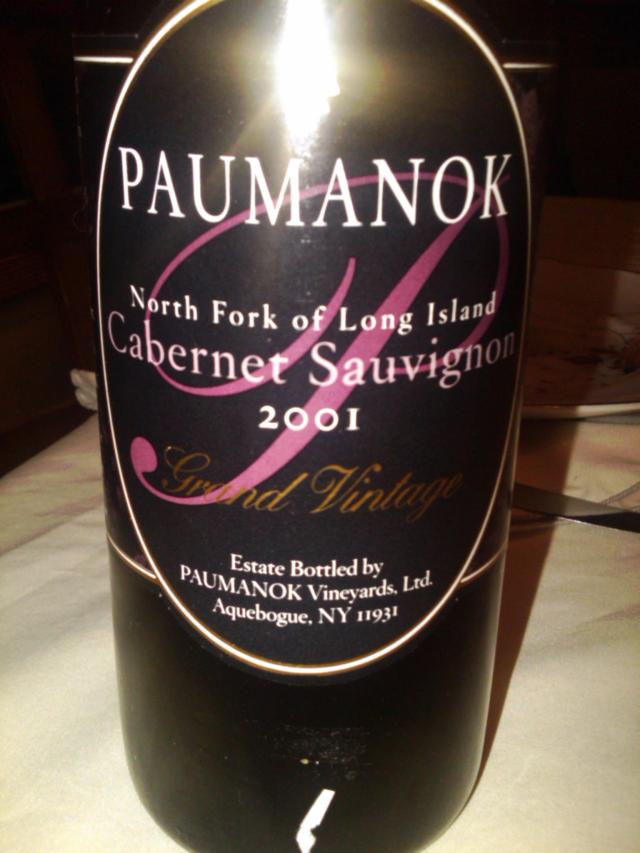 Wine shops can be like an extension of your cellar.  They are my favorite places to get lost in, like a good bookstore or music shop.   I can remember as a teen, taking the “R” train from Queens to 8th Street in the Village in lower Manhattan, walk to Tower Records on 4th and Broadway looking for great musical  finds.  Wine shops are my new Tower Records, and my new favorite wine shop is in the middle of a shopping center in Middle Island on Route 25 called Gram Wines and Liquors.

I heard about Gram Wines at a TasteNY event at Shinn Estate Vineyards where the question came up; Best wine shop east of County Road 83.  Gram Wines and Liquors was mentioned and was now on my radar.

The day before Thanksgiving I decided to make my first visit there, to see what they had.  The place was jumping that night.   I was looking for some Pinot Noir that was requested for entry-level wine drinkers, in particular those that are moving from white wine to red.  I have some Pinot in my cellar, but not enough for those that want to start exploring.  Art, who runs the store along with his parents, was very helpful and excited to help, I mentioned that Mark Grimaldi sent me over to Gram.  When I first entered  the store I was asked multiple times if I needed help, but I usually don’t.  I was just browsing.  There was a nice Long Island section, which made me happy.  Especially when I saw this bottle from Paumanok Vineyards.  Paumanok Vineyards 2001 Cabernet Sauvignon “Grand Vintage”.  It was listed at $35 and I just had to have it.  The “Grand Vintage” label is only designated for Paumanok’s best wine from a great vintage.

When I find an old, Long Island wine, there is usually nothing that stops me from buying it, it’s like finding that rare boxed set from my favorite artist way back when at Tower Records.  This was a treat that I quickly grabbed up.

So how was the 2001 vintage?  I don’t remember, but from research, 2001 was a summer for the ages.  It was a warm summer with an exceptional fall from what I read.  The fall was warm and dry.  Accounts show that there was no rain from September to November, making Cabernet Sauvignon capable of achieving full ripeness.

When I opened the bottle the next day to have with our deep-fried turkey, I was a little nervous, there was some seepage on the cork after I remove the foil.  When I pulled the cork I did find some tartrate crystals, which I would have expected.   I was a little leery of the wine, first because of the seepage but secondly, the wine was showing some browning, meaning that it could be or is oxidized.

On the nose, there was a very distinct aroma of newspaper.  Yes, I said newspaper.  I am going to call this aroma Brett, or Brettanomyces.  I am not sure if it truly is brett, but it did dominate the wine at first.  If it is in fact brett, here is a little info on brett from Wikipedia:

When Brettanomyces grows in wine it produces several compounds that can alter the palate and bouquet. At low levels some winemakers agree that the presence of these compounds has a positive effect on wine, contributing to complexity, and giving an aged character to some young red wines. Many wines even rely on Brettanomyces to give their distinctive character such as in Château Musar and Château de Beaucastel. However when the levels of the sensory compounds greatly exceed the sensory threshold, their perception is almost always negative. The sensory threshold can differ between individuals, and some find the compounds more unattractive than others. While it can be desirable at lower levels, there is no guarantee that high levels will not be produced. As Brettanomyces can potentially spoil a wine it is generally seen as a wine spoilage yeast, and its presence in wine as a wine fault.

The aroma of the newspaper overpowered the wine.  Some at the table thought the wine was bad, some even questioned why I was still drinking it.  The reason; I don’t mind brett.  As I have grown as a wine geek, I have come to realize that brett, for me, can enhance the wine.  Brett makes me work harder to find the essence of a wine.  It took some time but there were some interesting elements that I found in this bottle once the brett calmed down.

After getting past the Brett, I was picking up some briny black olive, iodine and a menthol or eucalyptus note.  Some fruit did come through with hints of cherry and fig.  There was some coca powder and some sweet vanilla.  Elements of forest floor leaves and pine cones.

When I tasted the wine, there was notes of fresh ground coffee, earth, slate and dried herbs.  Smoke and cured meat and cured olive also were on the palate.  There was some elements of prune and raisen with the slightest note of dried black cherry.

I decided to save this bottle for as long as possible after Thanksgiving and go back and taste over the course of a few days.  Over the course of three days I found this wine to evolve.  The elements that I tasted on day one continued to show, some with more impact that others, but by day three, I was picking up some green vegetal notes and this delicious molasses, brown sugar note with hints of prune and dried fig.

Was this what I had expected?  Yes, it far exceed my expectations.  Because I saw the seepage and was confronted with brett in the begning and saw the wine browning, I was fearful that I picked up a bad bottle.  But I was patient, milking all the time from it.  Tasting and retasting the wine.  I knew going in that this was not going to be a big fruit forward wine — as a wine ages, it looses some of that fresh frutiness — and reverts back to some of the darker, more mysterious elements that are imparted from barrel or bottle aging.  These are qualities that you will grow to like as you explore the world of wine.

This was a real Thanksgiving treat for me, finding an older vintage from my favorite wine region.  The other treat was finding my new favorite wine shop Gram Wins and Liquors in Middle Island.  Thanks Mark for recommending Gram and thanks Art for your help and your shop.

I am a Licensed Funeral Director who is having a love affair with Long Island Wine and the people that make Long Island wine so special. I am married to my wife Melissa and live in Rocky Point. Our first son Gabriel Noel was born on July 27, 2010. We have three cats and one dog.
View all posts by Michael Gorton, Jr. →
This entry was posted in 2001, Cabernet Sauvigon, Long Island, Paumanok Vineyards. Bookmark the permalink.