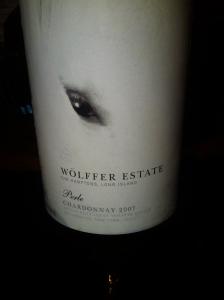 A while back, I was invited to take part in a Twitter Tasting with some wines of ﻿﻿﻿Olivier Leflaive thanks to the importer, Frederick Wildman and Sons.  I tasted through 4 different White Burgundy wines.  White Burgundies are known as chardonnay and in Burgundy, chardonnay is the white varietal.

However, for those of you who may be looking for some wines that are Burgundian in style, look to Sagaponack, where at Wölffer Estate Vineyards, wine maker Roman Roth crafts a chardonnay that in my opinion is made in the Burgundian way.

On the nose I was picking up elements of apple, pear, and a little peach.  Baking spice, baked apple, toffee, pineapple and as the wine came closer to room temperature there was a note of lime.

When tasted I was picking up some more of a concentrated apple, pear and peach note with some brown sugar.  Baking spice and toast followed right behind.  There was a stoney minerality that carried to a nutty finish.  The flavors were bright and the acidity was in balance.  You knew it was there but it did not overpower.  A well made, well-balanced wine.

If you were looking for Burgundian style wines, you should look Wölffer Estate Vineyards and try their 2007 “Perle” Chardonnay; it’s the closest you will get to a white Burgundy  here on Long Island.

I am a Licensed Funeral Director who is having a love affair with Long Island Wine and the people that make Long Island wine so special. I am married to my wife Melissa and live in Rocky Point. Our first son Gabriel Noel was born on July 27, 2010. We have three cats and one dog.
View all posts by Michael Gorton, Jr. →
This entry was posted in 2007, Chardonnay, Long Island, Wolffer Estate Vineyards. Bookmark the permalink.