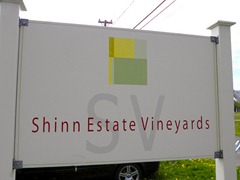 A few weeks ago — OK about a month ago, Shinn Estate Vineyards in Mattituck held their 7th Annual “Shinn-Dig”  This is an opportunity for the Shinn Estate Vineyards extended family — those that support them and buy their wine’s throughout the year — to gather at the vineyard for a tasting of the future releases of their wines.  You can buy the wines by the case or mix up a case and have the opportunity to buy the wines at a discount.  As David Page, co-owner, likes to say, “Think of it as community sponsored agriculture for wine!”

This is the Gorton Clan’s 4th time we have attended the Shinn-Dig.  It is a family event where my parents, Mike and Patty, my brothers Tim and Matt and this year my Grandparents join Melissa’s parents, Dave & Edith for a fun, relaxed evening of wine and food.  We never leave disappointed.  And we always leave with multiple cases.Usually Melissa’s sister Stacy and her husband Darren join in, but due to a conflict, they could not be there.  However, Aunt Stacy was kind enough to watch Gabe for us.

We tasted through four wines (three white’s and a rose) from the 2010 vintage and four reds from the 2009 vintage.  I have to say that there was not one wine that disappointed and there were a few wines that really surprised me the table that night. 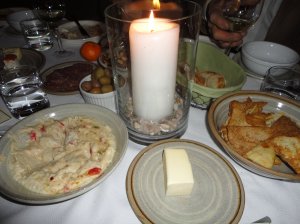 Thanks Ralph Ron DiGennaro for the photo

We munched on some delicious cheese and homemade pita chips, had some delicious olives and the hit of the night was a bean spread.  David always prepares a hearty stew to warm us and help enjoy the wines.  Tonight he prepared a delicious duck stew that was packed with flavor and made us feel as if we were home.  The night ended with some delicious home-made cookies that Barbara made.  I am not a coconut fan, but there is something about her coconut macaroons that just ends the night perfectly.

Wile we were nibbling, talking sipping wine and enjoying the night, David talked about the vintages, about the wines we were going to taste and more importantly he spoke about the vineyard practices and where Shinn Estate Vineyards was going in the future with some new wines and how they were doing on their bio-dynamic certification.  Some of the wines we tasted tonight were the first ever organically and bio-dynamic grown wines on Long Island, true history in a bottle.

I am going to talk about the wines we tasted.  The were all delicious, ripe and all showed beautifully.  Some were still not finished or polished, but you could taste to possibility and what the future would hold.

Shinn Estate Vineyards 2010 Coalescence: this is a return to the original meaning of coalescence — the union of diverse things coming together to form one.  Coalescence is a blend of Chardonnay, Sauvignon Blanc, Pinot Noir and Merlot.  The juices are blended and fermented together at the time of pressing.  The Merlot juice and Pinot Noir juice is pressed right away as to keep it as clear as possible.  Looking at the bottle there is a slight tint to the wine, but this does not distract at all, in fact, it makes it more appealing.  Notes of Lemon and Lime with tropical fruit and notes of peach and slight aroma a fresh herb.  The wine is lively and bright with acidity.  Notes of grapefruit and citrus lead the way on the palate with hints of salinity beach rock and fresh-cut herbs.  There is a delicious tropical finish with nice minerality.  The mouthfeel is what really caught my attention.  It was lush and viscus.  A must for your summer meal adventures.  This was a huge hit at our table.  It is available in the tasting room.

2010 “First Fruit” Sauvignon Blanc:  Year in and year out, this is one of my favorite Sauvignon Blanc on Long Island.  Notes of grapefruit and fresh herb fill the glass with elements of beach rock, peach, lemon, kiwi and mango.  This wine was racing with acidity, tongue tingling acidity.  Tasting it, I was picking up some more grapefruit with hints of honeydew melon.  It had me craving oysters and scallops.  This will be released next week.

2010 Chardonnay:  Stainless steel fermented, this is the wine that captured all of our attention.  It was my favorite of the night.  A cloudy glass was poured for us — this happens to be the only “unfinished wine” as the lees are still be stirred — it did not distract from aroma and flavors.  Apple, pear, white almonds and hazelnuts with hints of mango, peach and spice filled the glass.  There was a richness that I was picking up on the nose, buttery and creamy like, but I could just not pinpoint it.  When tasted, there was bright acidity, with apple and spice showing through.  Then came elements of fresh tropical fruit, pineapple, mango, star fruit and warm spice notes.  There was a bit of heat I was picking up on the finish, but remember, it is still not finished.  I think our group bought a case or two of this, and we never buy a case of Chardonnay.  This is one to watch.

2010 Rose:  The color may have been lighter than in years past — this is no wimpy rose — this is a blend of Merlot and Cabernet Franc, with Cabernet Franc taking the lead.  Watermelon and Strawberry dominate the nose with hints of fresh-cut herbs and fresh morning grass.  Strawberry, raspberry, and watermelon carry on the palate with bright acidity.  Fresh herbs like oregano and basil also make an appearance with a delicious dried raspberry finish.  This will be released soon.

We now moved onto the red wines from the 2009 vintage.  2009 was a bit of a tough vintage, most people thought that the vintage would be ruined in June of 2009, thanks to all the overcast and rain, but things improved.  Eventually things came up to speed.  The grapes developed and ripened well into October.  An extended late summer helped make some of the best 2009 wines.  Some have even said that due to the long growing season, 2009 might be the best yet.  the 2009 wines have been delicious across the island, we will soon see some of the 2009 reds and we will see where they stand.  But for now, here is what we tasted of Shinn Estate Vineyards 2009 red lineup.

2009 Merlot: As it was being poured into my glass there was an intense aroma of cherry and plum coming out of the glass.  NOtes of Strawberry, spice and earth were then followed by Licorice.  The reminance, what I like to call the last few drops of wine in the glass after it has been finished, showed some raisin and prune notes.  Tart cherry and spice were on the palate with more licorice.  Notes of Cinnamon, cardamom and plum continued.  The finish was long with hints of vanilla bean and coffee beans.  This was a hit at our table.

2009 Wild Boar Doe:  This is one wine that year after year is a favorite of mine.  I have said before and I will say it again, when I taste this wine, blind or not, I immediately am transplanted to the vineyards.  If there was a wine that symbolised Shinn Estate Vineyards, in my opinion, this would be the wine.  Packed with an earthy nuance and concentrated berry on the nose, I found this more earthy and spicy then in years past, with notes of smoke, meat and vanilla with hints of blackberry cherry and cedar.  The spice also takes center stage on the palate.  Cinnamon, cardamom and clove lead the way followed by notes of chocolate and baked berry fruit.  Delicious and balanced this is a serious wine that when released will be one to watch.

2009 Nine Barrels:  Anthony Nappa, Shinn Estate Vineyards winemaker, takes the best nine barrels of Merlot and blends them together with a small percentage of Malbec and Petite Verdot.  Another favorite of mine and of the table this year, notes of Blackberry, blueberry and dried raspberry and plum filled the glass with hints of dried flowers and grilled fig.  Earth and exotic spice are secondary aromas with hints of vanilla, smoke, cedar and earth.  Big cherry and plum notes appear on the palate with notes of coffee, smoke and spice.  Vanilla and blackberry lead a minty finish.

2009 Cabernet Franc: This is a big wine, not showing the traditional herbaceous notes that you see from cool vintages, like the 2009.  This was reminiscent of the great 2007 vintage.  Notes of raspberry and cherry lead the way followed by mint and dried herbs.  Exotic spice follow behind with notes of earth, and dried flowers.  The palate brought flavors of tart sour cherry, mint and bay leaf.  Velvety ripe tannins with hints of smoky spice.  a dried herbal finish  mixed with notes of vanilla and dried raspberry.  Bright acidity carry this wine with well-integrated tannins.  A very delicious wine.

2009 Cabernet Sauvignon: A very enticing nose.  Loads of Blackberry, plum, boysenberries all fresh and ripe with hints of concentration.  Earthy and spicy with a minty, eucalyptus, and smoke undertone.  This was a big wine, still young in its development.  Tannic and notes of tart cherry pie filled the palate with hints of black pepper spice. 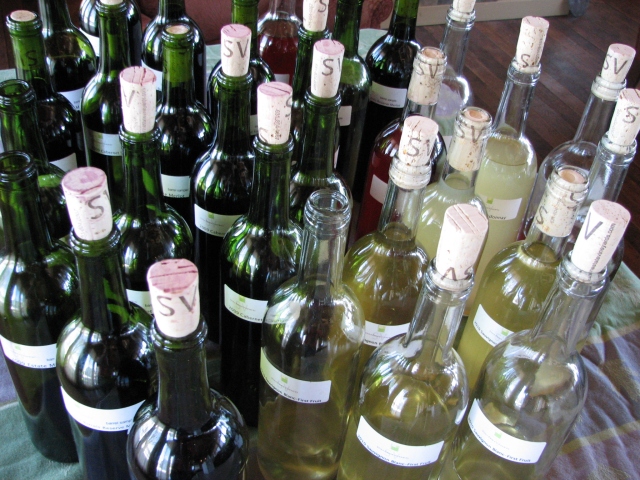 The night was filled with laughter, food and wine.  David told stories of the two vintages and gave us updates on their quest for Bio-Dynamic Certification.  Since Coalescence was bottled we walked out with 3 cases of it, as well as alot of other people too.

One nice addition to the Shinn-Dig this year was raffle drawings in each dining area.  In the farmhouse one person walked away with a Magnum of Wild Boar Doe from the 2005 vintage with others walked away with magnum of 2005 Nine Barrels and 2005 Cabernet Franc.  Another 3 people won bottles of champagne.  There was one more prize, the grand prize, a two night stay at the Shinn Estate Vineyards Farmhouse.  The winning number was chosen before the event and number 99 was picked.  My wife had Shinn-Dig order form number 99.  What a great way to end the night that was filled with such great wines.

Now, we need to see who will watch Gabe for two nights this summer!

I am a Licensed Funeral Director who is having a love affair with Long Island Wine and the people that make Long Island wine so special. I am married to my wife Melissa and live in Rocky Point. Our first son Gabriel Noel was born on July 27, 2010. We have three cats and one dog.
View all posts by Michael Gorton, Jr. →
This entry was posted in 2009, 2010, Barrel Tasting, Cabernet Franc, Cabernet Sauvigon, Chardonnay, Event, Future Releases, Long Island, Merlot, Rose, Sauvignon Blanc, Shinn Estate Vieyard. Bookmark the permalink.