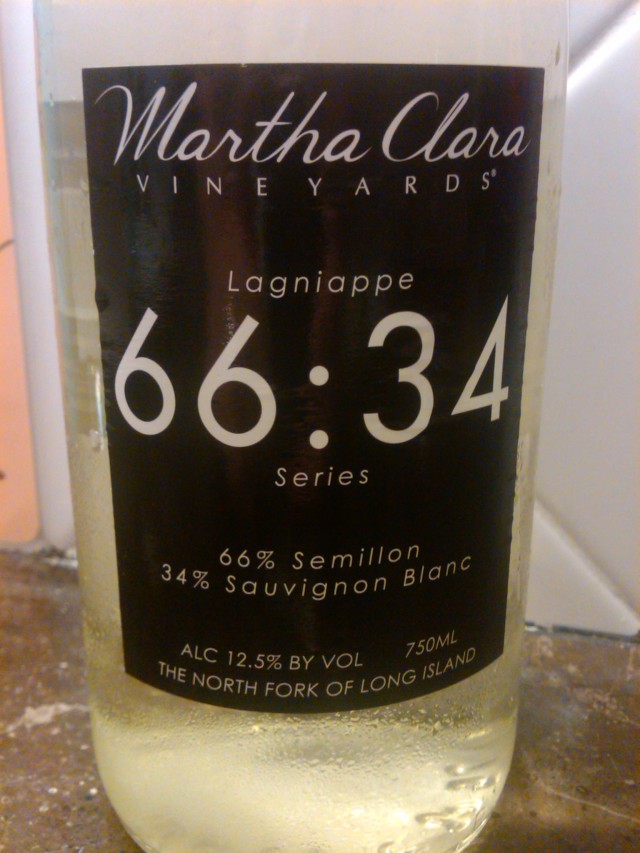 This bottle, Martha Clara Vineyards 2009 “66:34” ($20) is the perfect example.  It is part of the Lagniappe series.  Lagniappe (pronounced lan-yap) is a southern, mainly Louisianan term for a small gift given to a customer.  It’s kinda like a baker’s dozen, a little something extra.

Juan Micieli-Martinez, Head WInemaker and General Manager at Martha Clara Vineyards described Lagniappe in an email best, “it is a New Orléans term meaning a little something extra.  So, if you went into a Po-Boy shop and ordered a shrimp po-boy dressed with french fries and the server brought you the sandwich he/she would say something like, “Here’s your po-boy with fries and we put some hush-puppies on, that’s lagniappe.””

Juan came up with the idea for the Lagniappe series and this is the third offering in that series.  The 2007 Malbec was the first which was then followed by the 2009 Syrah Rose and now Semillon & Sauvignon Blanc blend.  He explains his reasoning for the Lagniappe series, “I figured we were making wines that were intended for the wine club only that were outside of our normal production, so I said let’s call the series The Langniappe Series.”  He continued, ” Bottom line is that we have the grapes, why not have some fun and blend!”

Obviously this is a classic white bordeaux blend but Juan also hinted that his inspiration for this wine was from his time he spent in Western Australia, “You can find beautiful Semillon/Sauv. Blanc blends in the Margaret River area.”

The artwork is not complete yet, Juan said that they are working with a Professor of Graphic Design from Loyola University in New Orléans for the Langniappe Series, hence the simple label.  Juan also hinted at a label design change with the 2010 red wines and the 2011 white wines.  This is defiantly something to keep your eyes on.

Now that you know a little bit about the Lagniappe Series, lets talk about this addition to the series, Martha Clara vineyards 2009 “66:34”.  A stainless steel co-ferment of 66% Semillion and 34% Sauvignon Blanc estate grown grapes.  It saw no oak and no Malolactic fermentation.  There was some lees contact post ferment which helps give it some body.  Only 200 cases were made.

On the nose aromas of lime, peach, white flowers, tea leaves clover and minerals jump out at you first.  Some secondary aroma’s at emerge as it sits in the glass and come off chill are tropical fruit like mango and papaya, hints of cantaloupe, almond and grapefruit.

On the palate the wine hits you with more lime and white flowers like a jasmine flower, bit-o-honey candy like taste with notes of peach pineapple and beach rock.  Secondary flavors of melon and green tea emerge as the wine warms up.

A delicious finish of ripe honeydew melon and fresh lime juice linger on the palate with some more clover honey and tea.  The wine is rich and lush thanks in part to the Semillion, which can have an oily sensation and the extra lees contact really gave it an extra roundness.

*I received this bottle as a sample from the vineyard

I am a Licensed Funeral Director who is having a love affair with Long Island Wine and the people that make Long Island wine so special. I am married to my wife Melissa and live in Rocky Point. Our first son Gabriel Noel was born on July 27, 2010. We have three cats and one dog.
View all posts by Michael Gorton, Jr. →
This entry was posted in 2009, Blended Wine, Long Island, Martha Clara, Sauvignon Blanc, Semillon, White Wine. Bookmark the permalink.