A Visit to Bedell Cellars 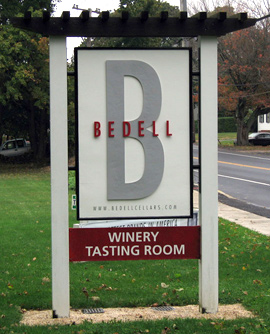 A while back I finally had the opportunity to meet up with Rich Olsen-Harbich, the new winemaker at Bedell Cellars.  I was interested to catch up with Rich, since this was the first time I had a chance to meet him at his new digs.

Rich has been making wines for over 30 years on Long Island at various vineyards and consulting as well.  Last summer Rich left Raphael for Bedell Cellars where Rich now can work with some of Long Island’s oldest vines.

Rich gave me a short tour and went over the lay out of the cellar and what he had going on in tanks.  There is nothing more exciting or enticing than the aroma of a barrel cellar.

Between tastings, Rich and I had conversations about our families, parenting, my life as a funeral director, his life as a winemaker.  We both are intrigued with each others profession — no surprise there.  When I taste with Rich and we have conversations, it like talking with an old friend.

We chatted for a bit then Rich let the tasting of the 2010 wines start with some Sauvignon Blanc.  Some of the wines we tasted still have no final home.  Some will end up in blends some will go in to single varietal bottling.  Rich said it is too soon to say as the trial blending is just starting to happen for the First Crush, Taste White and Gallery.

To give you an idea as to the different labels and their profile, First Crush is a blended white in fermented in stainless steel that exhibits bright aromas with vibrant thirst quenching flavors.  Taste White is a white blend that showcases the aromatics and the mouth feel of the blend.  The last blend is the Gallery blend, where the focus is on the barrel fermenting of the white blends that go into Gallery.  There is something for everyone and there is a progression that everyone can follow along with or stick with one.

First up were two lots of Sauvignon blanc, one from Bedell and one from Split Rock, in Greenport, near the Shady Lady.  The Bedell was crisp and refreshing while the Split Rock was more vicus, almost a little oily.  Based on the example about the different white blends, The Bedell cellars Sauvignon Blanc will go into first crush and Split rock will more than likely go into Taste White.

Two wines that stood out that were stainless steel and fermented with indigenous yeast, by the way, all the wines for 2010 were fermented with indigenous yeast.  The 2010 Viognier was an absolute delight.  Some of this will go into a single varietal bottling.  Fermentation stopped on this with some natural residual sugar, but the bright acidity that is the back bone of this wine will carry it.  An absolute delicious satisfying wine.  This should be a crowd pleaser.  I believe that this will be the first release of Vioginer by Bedell.  It will be a limited production wine.

The 2010 Gewürztraminer, from two vineyards, Bedell’s site and at Corey Creek were to complete opposite.  Putting the together with the right blend will showcase one delicious Gewürztraminer.  The Bedell Cellars Gewürztraminer was a classic Alsatian Gewürztraminer, bone dry with notes of floral, lychee and spice with the Corey creek was more restrained with a mineral streak.

We then went on to the barrel fermented wines.  Most of these wines will wind up in the Gallery wine.  The Chardonnay, which was just taken out of barrel to reserve the fruit character, showed delicious apple and bright acidity with the classic flinty, buttery toast that you could smell as Rich opened up the valve on the tank.

Another standout was what is temporally being called “Pasión” thanks to cellar master Seferino.  Pasión which translated means Passion, gets its name from the up front note of Passion Fruit.  Tropical notes like star fruit, mango and papaya also come to mind with a bright acidity and lovely lush mouth feel.  This is a blend of Chardonnay, Viognier, Gewürztraminer and Sauvignon Blanc.  One of my favorite tastings and samples I had.  There is only one barrel of this blend that was fermented together.  It will most likely be used in Gallery. 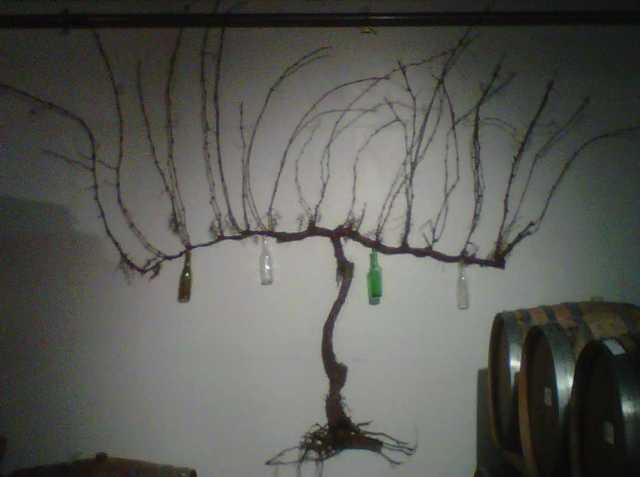 We then moved onto the red wines.  Merlot is the dominant grape planted there.  Rich explained the soil differences at Bedell and how one block of Merlot tastes very different from the other block.  FOr example, the south block of row can and does taste remarkably different from the north block.  It may sound strange and hard to understand, but a sudden but slight slope change will change the flavor and aroma of the same clone and same row of wine.  This all came together tasting the Merlot.  All picked on the same day from the same vineyard processed in the same way, from the same 30-year-old vines, show very different levels of aroma and flavor.  Is this an example of Terrior?  Terrior is the french meaning of the world land when talking about wine and the place it comes from.  I have a hard time grasping Terrior, but this Merlot demonstration helped a little.

The Merlot still was developing, it needed time to pull it self together, while the Cabernet Franc — that was coming together nicely.  Three different lots, Bedell, Corey Creak and Wells Road all showed classic Cabernet Franc notes, reminiscent of the 2007 vintage, but much more light in style and more finesse.  All three tasted different, but when I put them together in my mind and tried to blend them, this could be potentially a remarkable well balance, true Cabernet Franc.  Rich told me that the Cabernet Franc was nowhere near it is now as when he tasted it a few weeks back.  Notes of ripe fruit, juicy berries — raspberry, strawberry and cassis with herbal notes and a touch of plum and raisins.  When one says raisins, one may think that the fruit was over ripe, but not in this case.  This was the element of the beautiful fruit that was part of the 2010 season.  Rich really like the way Cabernet Franc was showing from 2010.

Another wine blend that Rich is working on is a Syrah & Viognier blend made in the Côte-Rôtie style.  In Côte-Rôtie Syrah and Viognier are harvested together and fermented together to creat this wine.  Up to 20% can be used.  Rich has included about 5% Viognier.  Just that small amount really lifts up the wine.  For example, the regular syrah from the barrel has a more meaty and masculine black pepper spice to it.  When the Vioginer is added, there is a floral element to the wine and the masculine meaty black pepper turns into a soft, white pepper almost feminine quality.  It is softer, more aromatic, and brings another demintion to the wine.  I like Syrah and I like syrah done in this way.  I will be keeping my eyes out for this one.

When I tasted this wine that night there were ripe flavors of blackberry and chocolate with hints of rich earthiness.  Vibrant acidity and smooth velvety tannins made this a fruit forward wine on the nose and palate.  Days after the tasting, I found myself wishing this was ready for the bottle and I had some readily available.  This is one wine to watch for in the future.

Rich is definitely making his mark and leaving his finger prints on one of the oldest vineyards on Long Island.  The 2010 vintage will showcase Rich and his 30 plus years working the vineyards of Long Island.  There is excitement at Bedell, and there is excitement with in Rich.  30 years is a long time to make wine, I have a feeling the next 30 years are going to keep getting better and better.

I am a Licensed Funeral Director who is having a love affair with Long Island Wine and the people that make Long Island wine so special. I am married to my wife Melissa and live in Rocky Point. Our first son Gabriel Noel was born on July 27, 2010. We have three cats and one dog.
View all posts by Michael Gorton, Jr. →
This entry was posted in 2010, Barrel Tasting, Bedell, Long Island, Looking at the Future Through a Barrel, Winery Visit. Bookmark the permalink.

3 Responses to A Visit to Bedell Cellars