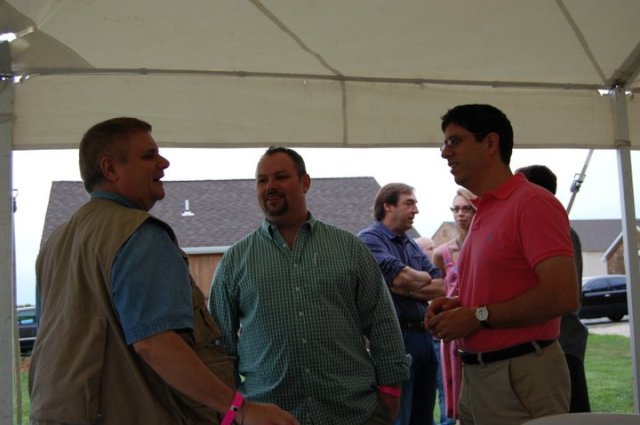 In the above photo, this is kinda what we were talking about when the first wine was poured at the Roanoke Vineyards 4th Smackdown:

“…Ok.  There is no question this is a Riesling…”
“…It’s young for sure…”
“…I am leaning Finger Lakes; it has that stoney minerality and a lighting bolt of acidity…”
“…Can we name the winery for the Extra Credit…”
” …I say Ravines…”
“…Or it could be Red Newt…”
“…Remember, it has to be 90 or better…they all have been in the past…”
“…Red Newt just got a 90…”
“…we all agree, Riesling, from the Finger Lakes, 2009 Vintage, from Red Newt Winery…”
“…Wait, this tastes of something I have had before.  That acidity…it just reminds me of Ravines…”
“…Sorry guys, I am going with my gut on this one.  It is from Ravines…”

It may not be word for word, there may be some paraphrasing but this is how I remember it.  My fellow audience panel members were Jared Skolnick, COO of Grand Cru Classes, Alan J. Wax of the Patch and myself.  As we walked in to Roanoke Vineyards on Saturday night for the Smackdown,  Scott Sandell, creative director of Roanoke Vineyards pulled us aside and said in so many words said, “can you do us a favor…we need you”.  And so, we were there to represent the 100+ audience members there that night.

The European Team. Photo from Alan Wax at Patch.com

The audience watched two panels, one representing the USA; Christopher Tracy, winemaker and partner of Channing Daughters Winery, and writer and former vintner Louisa Hargrave and Michael Cinque, owner of Amagansett Wines & Spirits and a partner in Red Hook Winery,  the other panel an International Team consisting of Spaniard Miguel Martin, winemaker at Palmer Vineyards, German Roman Roth, winemaker for Wolffer Estate Vineyards, Roanoke Vineyards andGrapes of Roth, and Frenchman Pascal Zugmeyer, a certified sommelier.  We all tasted seven wines that night from around the world blind.

The audience team nailed the first wine with 100 points,  2009 Ravines Cellars Dry Riesling from the Finger Lakes.  It was a great feeling, but that feeling lasted for such a short time.

The next five wines we did not fare so well.  The second wine, we thought was a California Chardonnay, it was in fact a California wine, but no chardonnay was in this Bordeaux style white blend, it was a 2008 Arietta, On the White Keyes, a blend of Sauvignon blanc and semillion from California.

Next up was a red, we knew that for sure.  We thought it was a Pinot Noir from Oregon, Willamette valley to be exact from the great 2008 vintage.  Boy were we wrong.  We all felt ashamed and hung our heads low after it was revealed that this wine was from our home town. 100% Merlot, Long Island, Blend from the members of the Long Island Merliance, the 2008 Merliance.  It was not released, but I can assure you the audience sure wish it was.  It showed very well and I think it stole the show.  This wine will be released at the Second Annual Harvest Festival.

The American Team. Photo taken by Alan Wax at Patch.com

The next two wines were defiantly not our style and sure did stump us they were from the same producer but from two different vineyards.  The fourth wine was from a Smackdown wine alumni Orin Swift, maker of the Prisoner.  This one was a 2008 Orin Swift Papillion Napa Valley Red, a Bordeaux-style blend.  We thought it was a GSM (Grenache, Shiraz, Mourvèdre) from Australia.

The fifth wine was also from Orin Swift, but instead of from California, he went to France to make this, 2009 Orin Swift D66, a Vin de Pay des Cotes Catalanes in southern France.  This really stumped Pascal, the Frenchman.  He was not the only one.  We thought for sure this was an Amarone, dooped once again.

The sixth wine was one that I enjoyed the most.  It was a 2004 Scholium Project Babylon, a Petit Sirah.  This wine, made by winemaker, Abe Schoener, who also happens to make wines for Red Hook.  At this point we thought that the Smackdown was going to take a turn back to the 90+ scores.  We felt this was a local wine made in a hot year like 2007.  Weguess, Bedell 2007 Musse.  Boy were we off the mark.

Could there be redemption for the audience.  We hope so.  Some members of the audience came up to us and cheered us on and let us support before the last wine was poured.  This tasting was more of a mind game.  We had to do more analyzing and clue work.  We needed to think outside the bottle and outside the glass.  Some audience members offered suggestions and some insight about what the last wine could be.  We had to stop and think.

The last wine was also a Abe Schoener wine, from Red Hook, which Michael Cinque is a partner in.  Red Hook makes wines from grapes grown on Long Island.  This next one was made with grapes from Macari vineyards and made in Brooklyn and named after one of the owners, Joe Macari.  The last wine, 2008 Red Hook Winery Joe’s Tears, a Bordeaux-style.  This stumped everyone, but us.  Granted, we were the audience team and some members of the audience suggested different wines, but when Joe’s Tears was mentioned, we gave it a strong consideration.  Sure, we tossed around the idea that it was a Cabernet Sauvignon based wine from California.  But when we wrote Joe’s Tears down, we felt we had nothing to lose.

When the moderator for the event,  George Taber announced the wine, the audience Team erupted with cheers.  We guessed two out of seven wines.  We did better than the experts.  We were winners.  I could not call us winners with out our “official” coach and Winemaker Smackdown alumni Kelly Urbanik, the winemaker at Macari Vineyards.  As an audience member her insight into some of the wines was extremely helpful.

Those in attendance enjoying the BBQ prepared by Chef Keith Luce.

The night concluded with a delicious BBQ dinner prepared by chef Keith Luce of Luce & Hawkins in Jamesport.  The BBQ chicken and brisket were highlights for me.

After George Taber, the only reporter to witness the 1976 Judgement of Paris,  signed some more of his books the audience went home winners in more way’s than one.  Roanoke has found a wonderful way to bring people together, to taste wines that we may not all get a chance to, in a relaxing environment.  Kudos to the Roanoke Team, Richard Pisacano and his wife Soraya, Scott Sandell, the entire tasting room staff, the pourers that evening, the Wine Ambassadors who helped out, Chef Keith Luce and his team that prepared the BBQ, all of the winemakers, the USA team and the International team, Lenn Thompson of the NY Cork Report who was the official taster for the night, Tracy Ellen Kamens, Smackdown Alumni and official scorer for the night, George Taber and everyone in between who I may have missed.  You all made the audience enjoy that night and because of you we all won.

I am a Licensed Funeral Director who is having a love affair with Long Island Wine and the people that make Long Island wine so special. I am married to my wife Melissa and live in Rocky Point. Our first son Gabriel Noel was born on July 27, 2010. We have three cats and one dog.
View all posts by Michael Gorton, Jr. →
This entry was posted in Blind Tasting, Event, Long Island, Roanoke Vineyards, Wine Education. Bookmark the permalink.