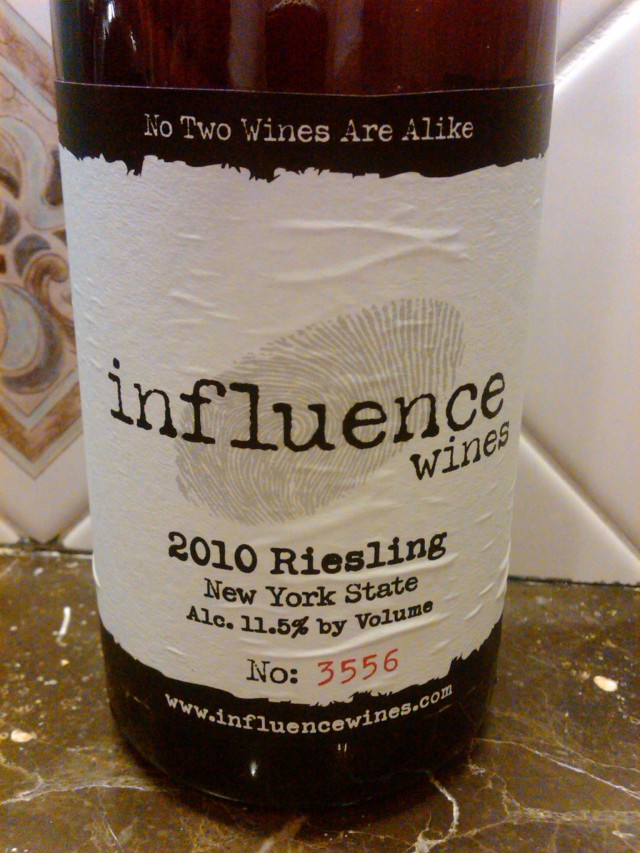 Erik Bilka has made wine for some time for many people on Long Island.  As a production wine maker at Premium Wine group, he probably had his hands on some of your favorite wines.  But you did not know it.

In 2009, Erik, a Buffalo, NY native took the opportunity to make wine under his own label and put his name on the bottle.  So Influence Wines was born.  I really liked Erik’s 2009 release and I was looking forward to the 2010 release.

In 2010 Erik continued to make wine, this time he purchased grapes from Dalrymple farms in the Finger Lakes on Seneca Lake.  His Influence was found for sure in the winemaking.  No added sugar, no added acid, it shows true essence of the Riesling grape and the region it was planted in, the Finger Lakes.

Here you can read from Influence Wines website what happened to the grapes at harvest and how they arrived on Long Island:

Once harvested, Influence Riesling is delivered to White Springs Winery in Geneva, NY on Seneca Lake, where the experienced staff led by Derek Wilber crush, press, and cold settle the juice, which is then shipped to Premium Wine Group on the North Fork of Long Island. Upon arrival, winemaker Erik P. Bilka begins the winemaking process. The juice is fermented in stainless steel tanks. Before completion fermentation is halted in order to maintain the natural residual sugars found in this semi-dry vintage. The refining process which involves separating natural occurring sediment from the final product is done delicately in order to preserve the fruits integrity.

On the nose aroma’s of fresh sliced peach, tropical pineapple and stoney minerality jump out at you.  Lime, more tropical fruit and some dried fruits rise up as the wine warms to room temperature.

On the palate lime, citrus, melon, pear and peach mix beautifully with bright acidity and just a hint of residual sugar.

On day two there were some tea leaf elements and some tropical notes with a hint of wet slate.

I am a Licensed Funeral Director who is having a love affair with Long Island Wine and the people that make Long Island wine so special. I am married to my wife Melissa and live in Rocky Point. Our first son Gabriel Noel was born on July 27, 2010. We have three cats and one dog.
View all posts by Michael Gorton, Jr. →
This entry was posted in 2010, Finger Lake Region, Influence Wines, Long Island, Riesling. Bookmark the permalink.