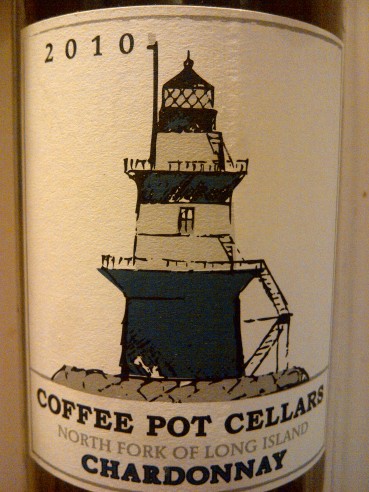 Coffee Pot Cellars is the personal label of Osprey Dominion‘s winemaker Adam Suprenant.  Adam has made wine at Osprey’s Dominion for over a decade.  He has been itching to make his own under his own name for some time and starting with 2008, everything fell into place.

Adam does not own a vineyard, which is something that you see from some wine makers on the North Fork; think Jim Waters, Anthony Nappa, Erik Bilka and John Leo to name some.  With his years of working on the North Fork, he has built relationships with various growers.  These relationships that he has built are going into the bottles that Adam calls Coffee Pot Cellars.

Adam has 4 wines now in his portfolio.  Coffee Pot Cellars 2010 Chardonnay ($16) is one that kept me coming back to the glass.

Made with grapes from Sam McCullough Vineyard in Aquebogue.  ( He also gets his Merlot grapes from there as well)  This Chardonnay shows the 2010 vintage well.  Ripe, fresh fruit with hints of long hot growing season.  It’s fermented in neutral oak barrels and did not go through Malo-lactic fermentation.

On the nose I was picking up hints of Apple, lemon, lemon curd and orange zest.  There was some hints of brioche, apple skin and tropical.  The brioche and yeasty notes were as a result of the ageing of the wine on the yeast used to ferment the wine, also know as sur lies ageing.

The palate brought more apple and lemon notes with more tropical flavors and a hint of white pepper spice.

The wine showed bright and clean and the acidity was crisp and refreshing.  It did show some of it’s 13% abv, but mostly as it came to room temperature.

This wine can be purchased on Coffee Pot Cellars web site and at the Greenport Farmers Market.

I am a Licensed Funeral Director who is having a love affair with Long Island Wine and the people that make Long Island wine so special. I am married to my wife Melissa and live in Rocky Point. Our first son Gabriel Noel was born on July 27, 2010. We have three cats and one dog.
View all posts by Michael Gorton, Jr. →
This entry was posted in 2010, Chardonnay, Coffee Pot Cellars, Long Island. Bookmark the permalink.