Something Old, Something New — a Peconic Bay Wine Dinner at Jewel 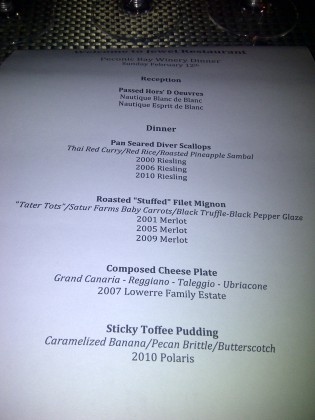 James Silver, Peconic Bay Winery‘s General Manager, hit the nail on the head when he said that this dinner was old meeting new.  Jim, was talking about older wine from Peconic Bay Winery meeting a new restaurant, Jewel that is part of Tom Schaudel restaurant line up.

On Sunday night, February 12 (i know, it was a while ago) over 100 people filled Jewel to attend a very special vertical wine dinner.  Peconic Bay does not often do wine diners, and after this one I wonder why not!  Not many vineyards do vertical dinners with older wines and after this dinner I have to ask again, why not!

When guests arrived we were offered two choices Nantique Blanc de Blanc or Nantique Esprit de Blanc.  Both white wine blends the only difference was the EdB was sparkling.  Both very nice everyday drinking white wines.  They went well with the past hors d’oeuvre.

When it came time for dinner, we took over the restaurant.  It was a site to see, everyone had three glasses in front of them waiting for the first vertical of wines to be poured.

Tom prepared a pan seared Diver Scallop dish with Thai red curry red rice and roasted pineapple sambal.  It was paired with Peconic Bay’s 2000, 2006 and 2010 Riesling.  The dish was delicious and the pairing with the wines was perfect.  While we waited for the dinner to be served, I took a small taste.  I really loved the 2010 Riesling.  Minerals and packed with tree fruit it was bright clean and crisp.  The 2006 was a bit more austere.  Minerals and flowers with subtle hints of apple, melon and pear.  And the 2000 was a beautiful golden color, delicious aromas of pineapple, apple, dried apricots and clover honey.  Bright clean acidity gave the lush wine some kick.  It was a great wine with the dinner.   While I really loved the 2000, the 2006 seemed to enhance the dish and the dish no doubt enhanced the wine.  I wanted more and could have had that same dish time and time again.

But there was some older Merlot waiting for us.

The next dish was Roasted Stuffed filet Mignon with home-made Tater tots, baby carrots, black pepper glaze and a beautiful black truffle shaving on top.  Paired with the meal was Peconic Bay’s 2001, 2005 and 2009 Merlot.  Not a bad Merlot poured was in my glass.  Every single one went perfectly with the dish and it was so hard to pick one that was my favorite.  The 2001 was cool and relaxed with hints of earth, dried cherry, violets, tobacco, cedar and plum.  Well balanced, delicious and alive with bright acidity.  The 2005 might have been my favorite if you really forced me to pick one.  Cherry, plum, blackberry, earth and cedar box filled the glass.  I finished this wine with my last mouthful of food.  The 2009 showed huge potential as to where this wine could go.  I could see this in years from now just like the 2001.  Bright Bing cherry, ripe plum, raspberry, and fresh earth.  Cedar box again and hints of herb, chocolate and spice.  Of course the acidity and tannins were bigger since it was younger, but this wine has the potential of being something special in years to come.

Next up was one of the main reasons we went to this dinner.  A cheese plate.  I am going to say this with intent: Every wine dinner should always have a cheese plate.  I would rather a cheese plate than a desert place, but that is just me.  The cheese was paired with the 2007 Lowerre Family Estate Red.  And what a pairing it was.  I never had the LFE Red prior to tonight but it went perfectly with the cheese.  Such a beautiful wine.  At this point of the night I really was really just enjoying my time there with Melissa.  I promised her that I would not take notes or “geek” out.  It was hard, but I did.  I just enjoyed this plate and savored every sip of the wine.  I can tell you, I will be out to pick up a few bottles of this and hold on to them, they are a delicious well made wine.  I had a second pour with my cheese plate, the only time that night I asked for more wine.

The desert portion was an absolutely delicious dish.  There is nothing I love more for desert than some toffee, butterscotch or anything that resembles it.  Tom made up a Sticky Toffee Pudding with caramelized  banana, pecan brittle and butterscotch sauce.  It was paired deliciously with Peconic Bay’s 2010 Polaris, a chardonnay desert wine.

It was a memorable meal with some memorable wines.  It’s nice to have vineyards who can dip into their library and do a vertical tasting with a meal.  It’s not often that we get to keep a bottle and let it get some age on it. Peconic Bay did that for us and Jewel allowed us to gather and cherish something old and something new.

I am a Licensed Funeral Director who is having a love affair with Long Island Wine and the people that make Long Island wine so special. I am married to my wife Melissa and live in Rocky Point. Our first son Gabriel Noel was born on July 27, 2010. We have three cats and one dog.
View all posts by Michael Gorton, Jr. →
This entry was posted in Event, Food, Long Island, Peconic Bay Winery, Winery Dinner. Bookmark the permalink.