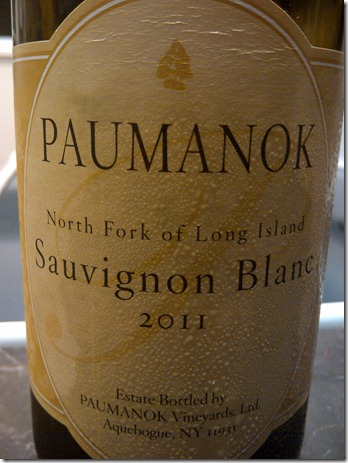 The 2011 vintage could have been one of the wettest ones on record, especially on the back-end of it.  After a stellar 2010 growing season, mother nature brought us back to reality.  A cooler growing season matches this cool climate wine region.  Some might say that 2011 is closer to what we should expect in this maritime climate.

What will you expect with 2011 white wines: you will hear lower alcohol, lower yields, higher acidity, and aromatic wines.

Paumanok Vineyards 2011 Sauvignon Blanc ($24) is a staple on many a table at summer picnic’s and dinner tables.  It will not disappoint and already, it has me craving scallops.

The nose brings grapefruit, lemon, fresh cut grass and fresh cut herbs.  Melon, think honeydew and some tropical notes.  There was a hint of gooseberry on the nose, but after a few hours open, it disappeared.

The palate was packed with more lemon than grapefruit with a bit more herbaceous showing.  Ocean water salinity and fresh rain minerality rounded out the palate.

Bright clean acidity was most noticeable, which made we want some shellfish.  Moderate lemony clean finish with hints of grapefruit and herbs.

I am a Licensed Funeral Director who is having a love affair with Long Island Wine and the people that make Long Island wine so special. I am married to my wife Melissa and live in Rocky Point. Our first son Gabriel Noel was born on July 27, 2010. We have three cats and one dog.
View all posts by Michael Gorton, Jr. →
This entry was posted in 2011, Long Island, Paumanok Vineyards, Sauvignon Blanc. Bookmark the permalink.